Joined 3Y ago
cake
Cake day: Mar 23, 2020
help-circle
rss
@OsrsNeedsF2P@lemmy.mltoasklemmy@lemmy.ml•What, if any, are the advantages of binge-watching?
link
fedilink
0•2d

If it’s bad, but a media you need to consume for whatever reason, it can be over faster

link
fedilink
@OsrsNeedsF2P@lemmy.mltoasklemmy@lemmy.ml•What, if any, are the advantages of binge-watching?
link
fedilink
0•2d

Is that a good thing? If the media is good, don’t you want time to think about it and ponder what might happen next?

Neither am I, but it’s a pretty decent article. Straight to the point with more details later.

How does the "Hot" algorithm in Lemmy's comment section work?

It feels like upvotes don’t have enough weight in the algorithm, as the order is almost always newest-comments-first…

How does the "Hot" algorithm in Lemmy's comment section work?

In most parts of the world, it tells us which bathroom to go into. If that’s something that’s sexist or needs to change, sure I won’t debate you on that, but I’ll definitely tell you that your priorities are whack.

link
fedilink
@OsrsNeedsF2P@lemmy.mltoasklemmy@lemmy.ml•How should we prepare for the end of the world?
link
fedilink
0•
edit-2
3d

I’m preparing by having the most fun I’ve ever had. Moving abroad, chilling with friends, and focusing on hobbies. If I was single maybe I’d be holding random girls at night too. YOLO

link
fedilink
@OsrsNeedsF2P@lemmy.mltoLemmy@lemmy.ml•What did the Viet people ever do to you, @yorma?
link
fedilink
0•5d

It is literally the only thing the account does

What did the Viet people ever do to you, @yorma? 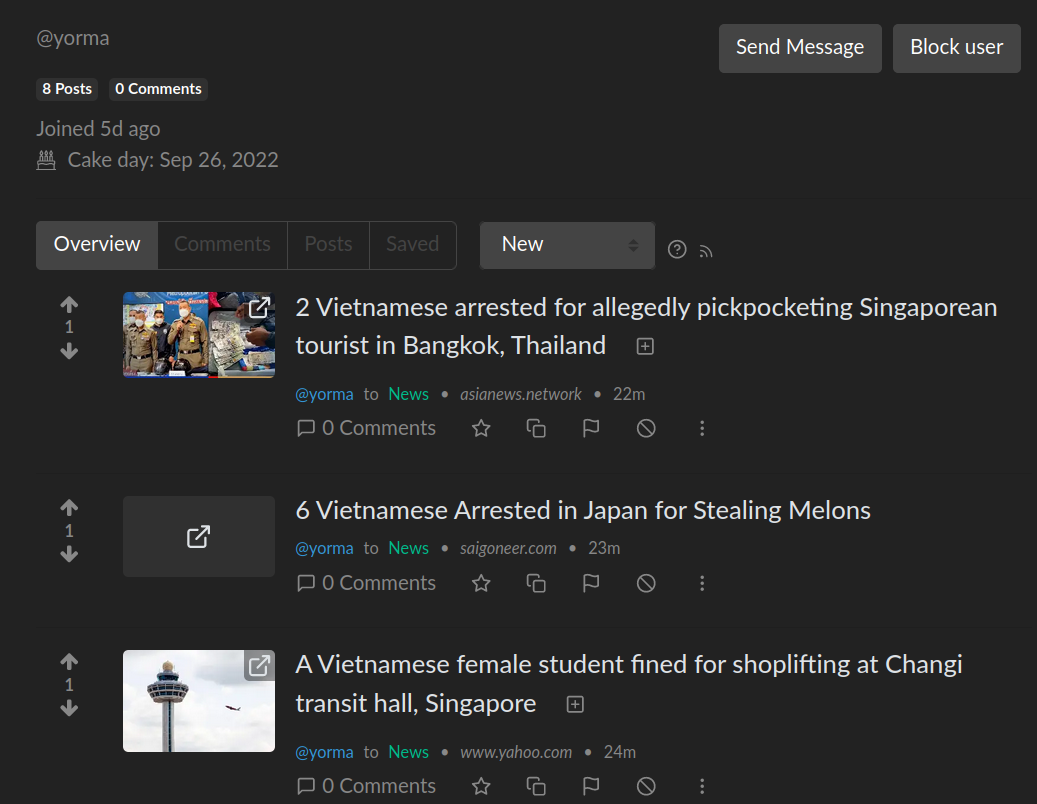 What did the Viet people ever do to you, @yorma?

Sounds like it’s returning an HTML page with an error. Check the logs

link
fedilink
@OsrsNeedsF2P@lemmy.mltoasklemmy@lemmy.ml•What are you glad you did before you died?
link
fedilink
0•6d

Yea, it’s in South Korea. I had the chance to go, but didn’t. Regret is strong, never going to say no to something like this again ㅠㅠ

link
fedilink
@OsrsNeedsF2P@lemmy.mltoasklemmy@lemmy.ml•What are you glad you did before you died?
link
fedilink
0•
edit-2
6d

Can’t believe you brought up Seo Dan, I’m about to cry lmao. That show fucked me up. Excited to forget about it then watch it again.

link
fedilink
@OsrsNeedsF2P@lemmy.mltoasklemmy@lemmy.ml•What are you glad you did before you died?
link
fedilink
0•
edit-2
6d

What happened to Seo Dan was gut wrenching. My girlfriend actually just came back from a musical a few hours ago of the show. Here’s a never-seen-before online pic :D 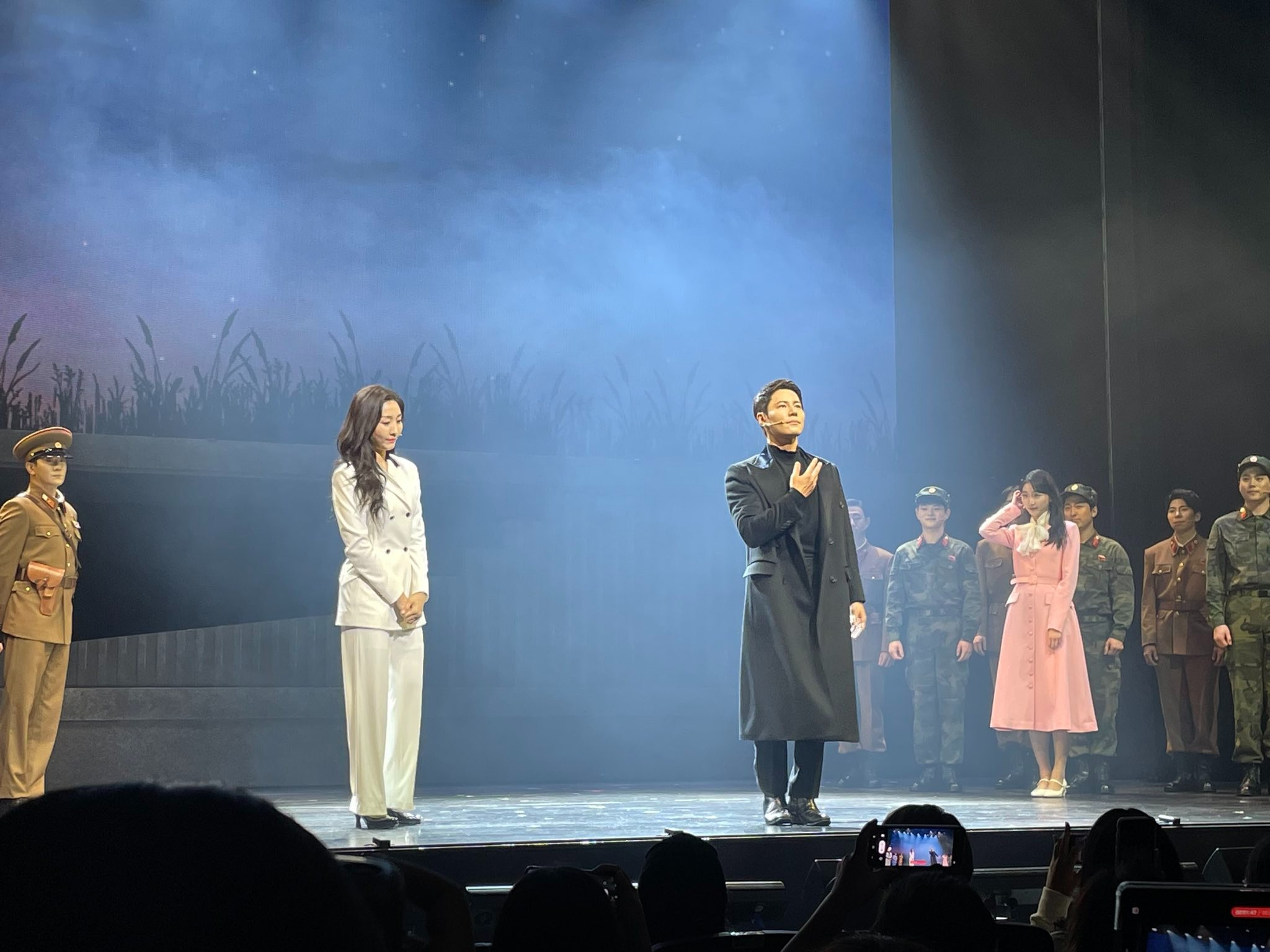 link
fedilink
@OsrsNeedsF2P@lemmy.mltoasklemmy@lemmy.ml•What sort of equality ought to exist in a family?
link
fedilink
0•7d

link
fedilink
@OsrsNeedsF2P@lemmy.mltoasklemmy@lemmy.ml•What are you glad you did before you died?
link
fedilink
0•
edit-2
7d

For me, I put my pride aside and watched K-Dramas.

After watching Crash Landing On You (Torrent Link), a story about a South Korean woman who finds herself in North Korea, my life was a complete emotional wreck for months. If I ever get Alzheimer’s, I’ll be happy knowing I can rewatch this continuously.

What are you glad you did before you died?

What are you glad you did before you died?

fedilink
@OsrsNeedsF2P@lemmy.mltoasklemmy@lemmy.ml•Should FIFA be placed under the governance of the United Nations?
link
fedilink
0•10d

No, it should simply be boycotted

As I learned quickly from /c/IsTaiwanACountry, Lemmy.ml isn’t here to create definitive lines and watch people walk up to them. They copy this policy on trolling, which sums it up to “Don’t piss us off” or “Don’t make us waste time moderating”.

Is it fair? No, but that’s not the point of this instance.

Doesn’t provide proof? Another check to my first point. You guys are feeding my ego here

Misinterprets my comment? Another check to my first point. You guys are feeding my ego here

Doesn’t bother to investigate a situation before commenting on it? Check.

Skipped reading my comments? Another check to my first point. You guys are feeding my ego here

Congrats, you linked another 10 posts, none of which prove the banned guy was racist. Over half the posts you linked weren’t even from the banned guy. Stop wasting my time, you’re making me think very poorly of commies.

Also, for future reference, one strong point is a lot better than dumping links (or in this case, dumping a link to links to images that weren’t even relevant to the point at hand, which is you are yet to provide any proof Masterofballs is posting racist content).

Congrats on proving both my comments for the second post in a row. Also grats on being queer? Anyways, if you’re so confident you’re right, feel free to actually reply with links of the guy being racist (instead of just saying you did), because the only post I see you doing that has 3 links to… Content not posted by the guy and non-racist content.

Not that anyone found an example, but 10$ costs more than a shitcoin transaction fee

If you’re an ML like you’ve stated in the past, you know why and don’t need me to explain to you why fascism is unacceptable and how they leverage liberal discourse to gain footing.

This is exactly why non-MLs look at half the commies and shake their heads. If all you scream is “fascist” and literally refuse to explain, then all we gather is “They call people they don’t like fascists”. Then commies get mad the rest of us “can’t see” the proper way.

To hear incorrect views without rebutting them and even to hear counter-revolutionary remarks without reporting them, but instead to take them calmly as if nothing had happened. This is a sixth type.

How does this not counter your first point? If you don’t practice what you believe in when it actually matters, you don’t have beliefs, you have hobbies.

Edit: This thread has gone on for many comments. Read them for a laugh. Basically they never proved the original guy is racist, only got increasingly frustrated. Which is honestly surprising, since I believe the guy is probably a racist PoS, but all I asked for was proof of it.

How does it work, that Tor Project alone says which nodes/ Relays are malicious?

There’s different types of malicious nodes - Some for tracking, some for redirecting people to fake HTTPS sites (there was a case where an exit node was scamming Monero users by sending them to a fake exchange page, etc. Avoid this by using onion URLs where possible). There are undoubtedly some malicious tracking nodes, but as long as some of the network is legitimate, Tor can be secure.

How many bad/malicious Nodes are there in Tor? Are there good guesses?

Hard to say, but to be honest it’s not hard to spin up new nodes on a docker image through DigitalOcean so a temporary attack on Tor that controls a large part of the network would be pretty cheap. That said, there haven’t been any big court cases where someone was deanoned through Tor malicious nodes, so if it’s good enough for criminals, it’s good enough for regular people too

Why does almost noone use my Snowflake Proxy which i got in my browser as an extension?

What are your stats?

Is Tor going to implement fake traffic, so global surveilleince can’t break Tor easily because of the similarities of the traffic?

This kind of explains the teeter-totter you see in comment sections, especially on posts that are a few days old but still on the front page thanks to Lemmy’s algorithm. …

People who Hate their Country: What's Stopping You from Moving?

People who Hate their Country: What's Stopping You from Moving?

What's An Easy Thing You Did That Made Your Life Easier?

A purchase, an app, a decision, anything…

What's An Easy Thing You Did That Made Your Life Easier?

What are some easy ways to use your computer to "Give Back" to the FOSS community?

I’ve always wanted to run as many programs as possible that “Give back” to awesome developers who create things. I’ve got a few, but I’m looking for more. …

What are some easy ways to use your computer to "Give Back" to the FOSS community?