Wait, I remembered something. Aren’t you the person who went around fedi a few weeks ago and threatened fedi admins with legal action? And then threatened me with legal action too just because I boosted one fedadmin’s toot that was not even directly mentioning you?

Yes. Yes indeed you are! 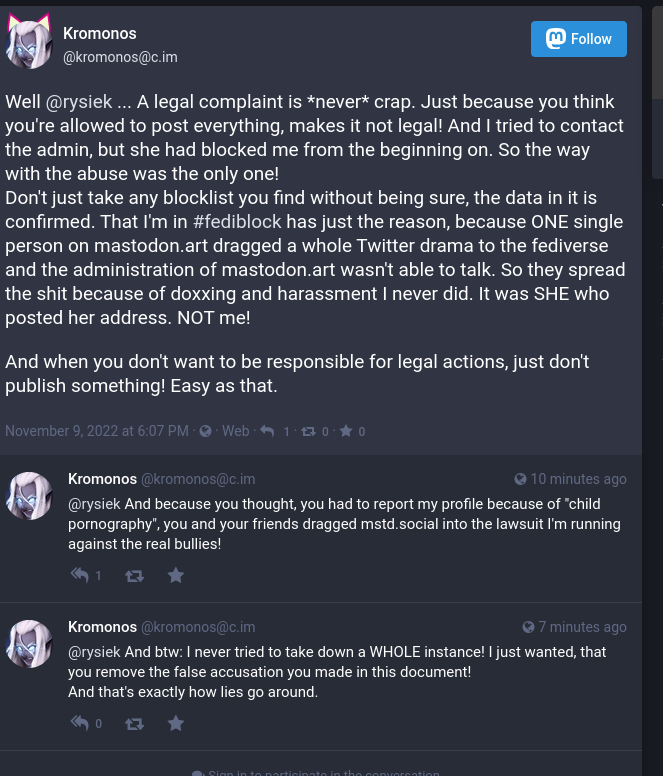 I really do wonder why people are inclined to block you and your instance. Truly a riddle, wrapped in a mystery, wrapped in an enigma.

Wait, I remember you. You are the one who reports profiles because of child pornography, without any evidence. You are also the one who don’t read clearly. Now I realize why you can only spread hate and lies. 🤷

EDIT: I can’t see any threat of legal actions. But you don’t care, because you interpret what you want into what was written 🤦

I have never once reported a profile for “child pornography”, as I have so far been fortunate enough to never have bumped into that on fedi. But sure, whatever. 😄

EDIT: I can’t see any threat of legal actions. But you don’t care, because you interpret what you want into what was written 🤦

Well, the OP is actually talking about “requests” being “forwarded” to their lawyer right in their post, so there’s that. But if you need a more clear proof, here you are. Directed at me and at a specific fediadmin.

I eagerly await any proof of your claims about my “reporting profiles because of child pornography” now. I’m sure you have them, you wouldn’t be making such strong claims otherwise, now would you?

Again you show that you can’t read at all. Because you show again a screenshot where I certainly did not address YOU directly, but that the toot was a reply to @admin. Moreover, the toot only says that the domain is added to a running lawsuit against those who spread the nonsense about me. I am obliged by law to do so, because it’s an evidence, that they don’t stop. That doesn’t mean at all, as you want to present it here, that I sue you or toot.lgbt. It just means that the evidence will be added to an ongoing complaint.
And because of your report about CP to mstdn.social, I’m not allowed to tell you about the ongoing criminal complaint against Stux. Also prescribed by law.

But it would destroy any arguments on your part to spread hate against someone, if you would read everything correctly and ask in case of problems of understanding. The way I see you, though, you’re adopting a culture to Fediverse that’s familiar from Twitter. And then you want to tell me, who has been in the Fediverse since ostatus, that you have so much more experience in administration and moderation?

You’re trying to judge me, without even knowing me, and spreading hate, because you’re unable to read!

EDIT: And that you’re mentioned in that toot is only, because the Mastodon client added you automatically. But for you, everything is about you anyway, and you also refer to everything directly as an attack on you. 🤦 My gosh, your ego must have suffered.

My initial claim was:

Aren’t you the person who went around fedi a few weeks ago and threatened fedi admins with legal action?

I can’t see any threat of legal actions

I provided the proof.

And because of your report about CP to mstdn.social

Still waiting for any kind of proof of that. Hint: there isn’t one, because I have never reported anyone for that kind of material.

And then you want to tell me, who has been in the Fediverse since ostatus

that you have so much more experience in administration and moderation?

I never claimed that I do. I said that fedi admins do. And provided a link to back that up.

And that you’re mentioned in that toot is only, because the Mastodon client added you autmatically.

Well if someone is throwing around legal threats, perhaps they could go the extra mile to be clear in who they are meant for? “Sorry, Your Honor, this account was mentioned accidentally” is not a great strategy here. And since I have no way of knowing what’s in the head of a person writing something like this, I can only base my reading of sich a threat on what is actually, you know, written there. 🤷‍♀️

But for you, everything is about you anyway, and you also refer to everything directly as an attack on you. 🤦 My gosh, your ego must have suffered.

Indeed, I am completely broken by the revelation that a legal threat by some rando on the Internet is not, in fact, directed at me. Hartbreaking.

Very thankful that there are people around reasonable enough to react to a fediblock by threatening legal action to fedi admins (btw, thanks for letting me know Stux is also targeted, I had no clear proof there are multiple fedi admins targeted, now I do!). People who totally aren’t making this “about themselves”. Internet truly is a wondrous place!

OK, you are really getting too annoying for me with your incapability to read!

EDIT: But thanks for bumping the topic. So that it can reach way more people.

I really don’t follow a single thing you’re saying, you’re all over the place. Where is the lack of transparency? The person in charge of the instance usually blocks new instances upon requests form its users. If they don’t, well… It’s their server. Change instances or set up your own where you’ll block nobody. The blocklist is available, you can check it out before you register.

I really don’t get what your point is.

And those who are so hungry for consent, you should think about whether you #FediBlocker have the consent for your nonsense?

but won’t allow anyone to use their blacklist to point out which instance is blocking which.

Thus, it clearly shows again that #FediBlock is solely a pillory to those who seem to have achieved nothing in their lives.

I… don’t even know here.

Wow, both at the same time? That’s an achievement!

And those who are so hungry for consent, you should think about whether you #FediBlocker have the consent for your nonsense?

As much as I see some issues with fediblock and knee-jerking that is sometimes going on there, consent is not an issue here. And I do empathize with admins/mods trying to protect their communities from dangerous/hurtful/abusive crap.

Thus, it clearly shows again that #FediBlock is solely a pillory to those who seem to have achieved nothing in their lives.

They achieved a fediverse that is genuinely nice to be a part of. This is something that comes up over and over, and over again from people who migrated recently from Twitter. It’s not perfect, and the way things are dealt with will have to change due to the massive influx of new people and instances, but to say they have not achieved anything is disingenuous and demonstrably false.

With that kind of attitude on display here, gee I wonder why people responsible for the well-being of their communities found the tool iffy. 🤔

However, the information about who blocks whom is in many ways more than just interesting for those who want to choose an instance.

Yes, that is something that will need to be handled better. But it will need to be discussed and a solution will have to be found together with admins and moderators of instances, not despite them.

A community dedicated to fediverse news and discussion.

Fediverse is a portmanteau of “federation” and “universe”. It is a common, informal name for a federation of social network servers whose main purpose is microblogging, the sharing of short, public messages.

Getting started on Fediverse;